Nurses working at the Emergency Medical Dispatch (EMD) centers in the Swedish counties of Uppsala and Västmanland routinely refer patients determined to not require an ambulance to non-emergency care. In this study, hospital records were reviewed to match calls to patients visiting an Emergency Department (ED) within 72 hours of being referred to non-emergency care by an EMD nurse. The prevalence of a number of outcomes was examined, and logistic regression models were used to analyze the effects of several variables of interest. 20% of callers referred to non-emergency medical care visited an ED within 72 hours. Of these, 57% received specialist level care, and 37% were admitted to the hospital. 86% of ED visits were found to be in regards to the condition the patient contacted the EMD for. Elderly patients were less likely to be referred to non-emergency care, but more likely to receive specialist care and be admitted. Very frequent callers were more likely to be referred to non-emergency care, while a moderate rate of contact was associated with increased odds of ED visitation and hospital admission from the ED. Non-utilization of the EMDs’ decision support tool was more common among callers referred to non-emergency care. Calls closed by dispatchers without further referral to other healthcare providers were less likely to result in an ED visit. The prevalence of ED visitations and admissions found in this study are similar to those found in other studies of Scandinavian pre-hospital triage, and a number of possibilities for quality improvement and future studies were identified.

Clinical Decision Support Systems (CDSS) can be used to predict patient outcomes, identify likely diagnoses and allocate healthcare resources. The literature investigating the ethical aspects of rule-based CDSS has identified issues relating to standards of care, the appropriate use and users of such systems, and their impact on patient-provider relationships. This paper extends this discussion to machine-learning based systems with particular attention given to their effects on distributive justice. Frameworks for examining these issues based on consequentialist, procedural and deontologoical normative theories of justice are proposed and discussed.

This document summarizes the aims and methodology of a non-interventional, prospective register study of the triage practices of nurses at two Swedish Emergency Medical Dispatch centers. This study aims to characterize the current practice of triaging low-acuity patients to non-emergency medical services, and validate the use of subsequent Emergency Department contact by these patients as a measure of quality. The primary data collection phase of this study is ongoing, and submission for publication is expected to occur in June, 2017.

This model was developed over the course of Fall 2016, and serves as the hypothetical software model for an interface design project.

This system is intended to function as a platform for processing EMS data ingested manually or via SOAP API. The platform is intended for implementation either as a locally hosted or cloud hosted solution, through the use of an Open-Source server framework such as Apache Spark. Data management tools may be implemented as per design specifications in R using the sparklyr, dplyr, ggvis, ggmap, MLlib and Shiny libraries (among others). Front end work would likely require some JS or PHP, particularly for the workflow-aligned modules. 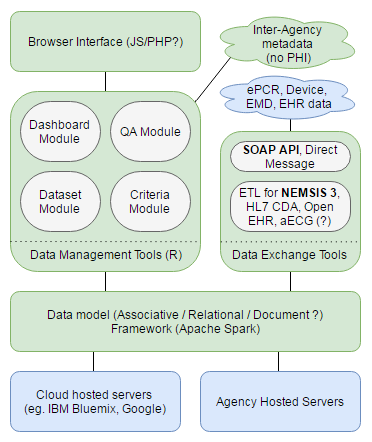 Systematic Quality Assurance processes are common in US Pre-hospital care. The Uppsala County Ambulance Service, along with much of the Swedish healthcare sector, relies on an incident reporting system to identify adverse events and maintain legal compliance. A software platform was proposed to enable the capture and review of records meeting certain criteria, and a review of agency requirements was initiated. This report is the result of the process of applying interface design principles to the de novo implementation of a systematic Quality Assurance system given the constraints of a mid-sized (~14 unit days per day) ambulance service.

Ghana’s National Ambulance Service is one of a handful of formal EMS systems in sub-Saharan Africa, and provides an excellent model for the development of EMS systems in the region. A number of interesting research papers have been published in regards to the NAS, most recently this beautiful and clever analysis, produced despite a dearth of typical data sources. ArcGIS was used to evaluate the addition of vehicles to the 128 ambulance stations in Ghana, and the effect of the expansion of NAS services on modelled response times since 2004 was described. I would be very interested in seeing this model fit to empirical data, but if nothing else network analysis certainly produces lovely maps.

An Analysis of Prehospital Care System Implementations in Developing Countries

Article written as a part of the Masters program in Public Health at Uppsala University, Spring 2016

Formal prehospital care systems have been implemented to various degrees across the developing world and have been shown to be potentially effective at reducing trauma-related mortality. The WHO report Prehospital Trauma Care Systems established consensus guidelines for organizing basic prehospital care systems in developing countries, noting a number of key elements of successful system implementation. This paper reviews the literature with respect to these key elements, identifying 3 basic types of interventions relating to the generation of local support, system formalization, and expansion and standardization.

The experience of implementing alternative transport protocols in the UK can be instructive, particularly for US EMS services rooted in a similar tradition of care. Indeed, the highest-quality evidence for the effectiveness of such protocols has come out of interventional studies performed in the UK. Below are a few studies representing a cross section of relevant articles investigating non-traditional EMS processes in use by the NHS.

A Mixed-methods analysis of an NHS Ambulance trust performed 1999-2001. This study outlines the circumstances at an English Ambulance trust prior to the recent efforts at standardizing expanded scope paramedicine – the similarities to US practice are striking, with rising ambulance demand and high levels of ambulance cancellations. This is a great example of how data can be used to gain insights into the structure of an organization even without the employment of sophisticated analytical techniques.

Assessment of an intervention whereby a paramedic and nurse or nurse practitioner were dispatched to low-priority calls along with the standard ambulance response. This team was able to significantly reduce transport rates as compared to low-priority patients recieving only an ambulance (46% v. 82.5% transported). In an economic model of the impacted healtcare systems, this was shown to produce an overall cost saving, though decision accuracy was not investigated. Placing hospital staff in the field represents one method for effectively identifying and treating patients for whom ED care is not indicated.

Assessment of an intervention whereby paramedics were trained in the application of “treat and release” protocols. This study found no statistically significant decrease in transport rates, though on-scene time and patient satisfaction with some aspects of care did increase. While the protocols used appear to be safe and acceptable to patients, it is striking that training and explicit protocols were not able to produce an increase in non-transport rates above those found in controls utilizing only informal processes. Training of existing EMS staff and rigorous protocols are another plausible method for implementing non-transport protocols. Further studies investivating this topic can be found in this literature review.

This study highlights the variability among NHS Ambulance trusts in the use of physicians in the field. Gauging the effectiveness of pre-hospital physicians in emergent cases is another under-studied care delivery mechanism which warrants further investigation.

This non-interventional study assesses the safety of a telephone-based triage system to identify patients not in need of immediate ambulance response. There was good agreement between the dispatcher and an expert panel as to the need for an emergency ambulance (96.7%), but it was found that about 10% of patients determined by dispatchers to be non-emergent were subsequently admitted to a hospital ward, raising concerns about the reliability of such systems.

This wide-ranging article reviews the challenge and promise of implementing predictive analytics on large healthcare datasets. The border between causal inference and mathematical modeling is porous and often difficult to define. While modeling has the potential to produce tangible benefits for practitioners and provides a basis for research, it is difficult to design studies demonstrating causal links on the basis of register data alone. The preponderance of observational studies in the field of pre-hospital care decision making as previously noted, can be seen as the result of an increased availability of ePCR datasets in the absence of experimental research. As pressure increases on EMS agencies to adopt progressive treatment and transport protocols, high-quality research is required to ensure that such processes can be implemented in an evidence-based manner.

The requirements placed on data for modelling and causal research are intertwined, and EMS must keep pace with hospital-based medicine in improving data quality and embracing data standards to improve interoperability. It’s not just billing and accountability – With clean data in a standardized format, the possibilities for business intelligence, predictive modelling and quality research are immense.

Can ‘Treat and Release’ protocols be implemented safely in Paramedic-based pre-hospital care systems?

Article written as a part of the Masters program in Public Health at Uppsala University, Fall 2015

This work is licensed by Douglas Spangler under a Creative Commons Attribution-NonCommercial 4.0 International License.